Movement and Learning: the importance of unstructured play versus playing on the computer

Much has been written about the importance of unstructured play for children (websites such as Childhood101, Awe & Wonder, Maggie Dent, Nature Play WA to name a few), however there is little information (should I say 'research') that specifically looks at the negative impact that playing computer games (for long periods of time on a daily basis) has on the learning ability of young children and adolescents (research such as longitudinal studies that assess changes in an individual over time may provide useful data). A research article "Children, Wired: for better and for worse" (September 2010) echoes my thoughts when it states "... little is known about how these pathways mature or how development is affected by technology use. Such research is urgently needed..." If your child (especially boys) plays for hours on the computer, take note! (yes, I have three boys!). I am specifically referring to non-educational computer games in this blog. 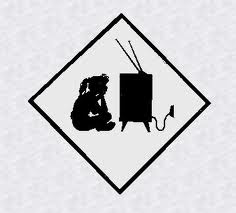 CAUTION:
CHILDREN NOT AT PLAY

My twelve year old son has recently been assessed as having Integration Deficit after seeing an audiologist (he had his hearing and auditory processing assessed). Children that have Integration Deficit typically find it difficult to process information that requires both hemispheres of the brain (the right and left hemispheres). An example would be where a child is required to process both auditory and visual information at the same time, something that is required on a daily basis in the classroom. A child with Integration Deficit has impaired development of the corpus callosum. The corpus callosum is a band of nerve fibres that connects the right hemisphere and left hemisphere of the brain, required for interhemispheric communication. What does this mean academically? A child with Integration Deficit may have difficulty with reading out loud (the ability to perceive prosody), reading comprehension and taking dictation. The flow on effect of this could be that the student then loses focus and attention in the classroom as understanding becomes too difficult. One cannot assume that playing computer games causes Integration Deficit (that would be implying causation), but when I consider the hours he has spent on a daily basis in front of the computer (over the past seven or so years), this has taken away time that could have be spent in unstructured play, creative play and using his imagination to strengthen neural pathways through other activities. There are periods of intense brain maturation at particular times in our lives; the first is during the first three years and the next between six to eight years of age. During these times, the connections between the corpus callosum and the vestibular system are strengthened. Unfortunately it is becoming more common that children as young as three are able to access gadgets such as iPhones and iPads. Not only that but know how to use them, turn them on or off, and watch YouTube! This is my concern for children: that constant exposure to playing computer games is having an unhealthy effect on the development and learning ability on their developing brain. But how much is too much?

One article published in the Daily Telegraph newspaper shares many parents' concerns;

Carla Hannaford, Ph.D in her book, "Smart Moves" says that to assist learning, she recommends:
1. Ban computer, tv and video games before the age of eight (to encourage children's imaginations to develop)
2. Incorporate a daily movement program that includes an hour of unstructured play such as swimming, dancing, sports, Brain Gym, yoga and rough-and-tumble play
3. Reduce simple sugars in children's diets

I am currently reading about the teenage brain and technology here. Findings from research into addictive computer gaming suggests the following could occur: a reduction in attention span (impacting on the learning process), weaker social skills and social development, impulsiveness and short attention spans (due to an over-active amygdala), and the fact that the hours spent on playing computer games could be spent on other  hobbies or sport. Another study suggests preventative factors that could be tried to reduce the amount of time children spend playing computer games, including attention switching (for example playing a sport or interest in another hobby), self education regarding the associated risks of online gaming addiction and parental monitoring such as setting up boundaries and time limits.

Why is it then that children have the ability to become so obsessed with or addicted to playing computer games? It has to do in part with a chemical in the brain called dopamine. Dopamine is a neurotransmitter (a chemical that transfers information from one neuron to another). The release of dopamine whilst playing computer games gives a feeling of satisfaction, pleasure, reward and emotional arousal. Children receive satisfaction and reward through playing computer games but they can also feel the same 'natural high' through play. Play (unstructured/spontaneous and imaginative) integrates both the body and mind, stimulates the vestibular system and produces oxytocin, all of which assist children with learning. Hannaford notes that it is  boys that require more movement than girls for brain growth and development.

How can movement from play have a positive impact on learning? We must first understand the vestibular system and how it influences brain activity. The vestibular system controls movement and balance, giving us the ability to move against gravity. It is the first sense to develop in utero and continues to develop throughout adolescence. It integrates our senses and enhances brain function. Spinning, climbing, crawling, rough-and-tumble play, bouncing on a trampoline, riding a bicycle, somersaults, handstands, bouncy castles, swings and swimming are just some activities your child can do to coordinate the two hemispheres, creating an efficient brain which has well developed neural pathways. Given this information, you can understand why play time during recess and lunch time at school are important not just for children's health! Some great activities that children can do outdoors can be found here.

We wanted to buy our kids another trampoline, after the springs broke on the other one; little did I know then the additional benefits we would all gain! After doing extensive research, we bought an awesome trampoline that looked safer than the traditional style. Can I say our boys love it (and it has no springs)! Since we bought it last year, the boys have been on it every day, rain or shine (it also doubles as a wrestling arena). Unfortunately though they still spend too much time on the computer or watching television. It feels like a constant battle against wills and I take great pleasure when I say "Im turning the computers off now" (with stares and glares and tantrums from BOTH my 12 year old and 4 year old) but I know it is for their health and wellbeing. 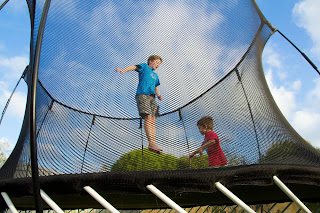 I have just watched a fantastic talk by Dr Dimitri Christakis, father, pediatrician and researcher, who echoes my thoughts and concerns. I recommend you watch it too. In his talk he explains what happens to babies and young children's brains when they watch television programs that are fast paced and over stimulating.

Ashley Montagu, anthropologist, sums up the definition of play rather well:
"In the early formative years, play is almost synonymous with life. It is second only to being nourished, protected and loved. It is a basic ingredient of physical, intellectual, social and emotional growth".

If you are a parent going through something similar to me, I hope I have helped to explain about why it is so important for your  kids to have a well balanced life. Our children are in a technologically driven world of gadgets and the World Wide Web. Gone are the days of typing on a typewriter, instead replaced by keyboards on computers. Books are slowly being replaced by eBooks and Kindle's (although I still love to hold and read a book!). Children read about history and geography and other subjects online.... what about the days of visiting a library?

All feedback and comments welcome. Thank you :)
Natalie

Thank you for leaving a comment on the Idibidi Kids BLOG :)

Promote Your Page Too